Can changes in cannabis potency explain the rise in treatment admissions for cannabis problems?

Specialist drug treatment services have seen marked changes in the type of problems clients present with in recent years.  In Europe, cannabis has now superseded opioids as the primary drug responsible for first-time admissions (Figure 1). The latest young peoples’ statistics for England reported that 77% of under 18’s in specialist drug treatment had a primary cannabis problem. This may create a significant challenge for service providers, who are working with a growing cohort of new clients with a younger age and different needs. Psychosocial treatments for cannabis use disorders have modest efficacy, and no pharmacological treatments are available (Curran et al., 2016). 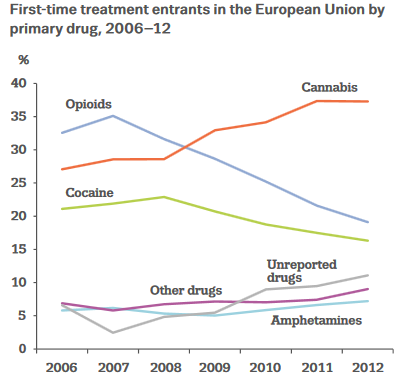 Why are treatment presentations for cannabis increasing? One possibility is that cannabis is becoming a more harmful substance. Concentrations of delta-9-tetrahydrocannabinol (THC; the main psychoactive constituent in cannabis) rose from an average of 4% THC in 1995 to 12% THC in 2014 in the USA. In the UK, the prevalence of high-potency cannabis on the illicit market increased from 15% in 2002 to 81% in 2008, which was followed by a 56% increase in new adult cannabis presentations to specialist drug treatment Use of high-potency cannabis is associated with a greater severity of cannabis dependence, especially in younger people. It is also linked to a three-fold greater risk of psychosis, increasing to five-fold in daily users.

Very few countries systematically monitor cannabis potency. Moreover, samples of cannabis in these studies typically come from police seizures, which may create sampling bias due to law enforcement procedures (e.g. stop and search). One exception is the Netherlands, where the Trimbos Institute purchase cannabis samples from at least 50 retail outlets each year using a randomised sampling protocol. These data offer the highest quality evidence for changes in cannabis potency worldwide. As part of my SSA fellowship I teamed up with researchers at the Trimbos Institute and IVZ, through a collaboration we developed at the Lisbon Addictions conference in 2015. We aimed to investigate whether changes in cannabis potency were associated with the number of first-time cannabis admissions to drug treatment over a 16 year period.

Our findings showed that THC concentrations followed a distinctive profile of change – increasing markedly from 2000-2004 and then decreasing to a lesser extent up until 2015. After a delay of five years, a very similar profile of change emerged for first-time cannabis admissions (Figure 2). These data provide the first evidence for an association between changes in cannabis potency and health-related outcomes. This association is biologically plausible, as higher doses of THC produce greater harms (Curran et al., 2016). Moreover, its time course (five year lag) fits within the typical duration of 10 years between first trying cannabis and first entering specialist drug treatment. 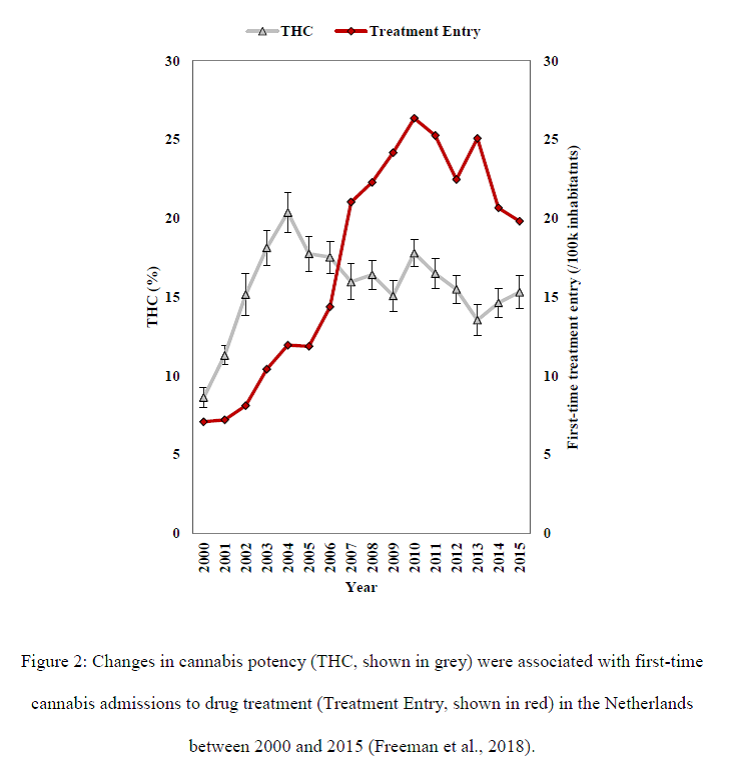 There are other possible explanations for changes in cannabis treatment, in addition to cannabis potency (McCulloch, 2017). In our data increasing cannabis admissions were also associated with a younger age of clients and a greater proportion of females. After statistically adjusting for these factors, as well as non-cannabis treatment admissions, the association between cannabis potency and first-time cannabis admissions was attenuated but was still highly significant (p<0.0001). Changes in the prevalence of cannabis use was not associated with treatment admissions in our data. However, other factors for which we lacked annual data (e.g. the prevalence of cannabis use disorders in the population) may also be important. Additionally, this was an observational study and cannot provide unequivocal evidence for causality.

As cannabis is increasingly legalised in several states and countries, these data highlight the extent to which cannabis potency, and population markers of burden attributable to cannabis, can change over a 16 year period. In the 2017 election the UK liberal democrats proposed limiting concentrations of THC through a regulated market although it remains to be seen whether this could be effective in practice, and if any benefits (due to reduced potency and age-restricted sales) would offset a possible increase in the number of users. Meanwhile new markets in the United States have rapidly expanded and currently include no tax or limits on potency. A recent study (Smart et al., 2017) found that within two years of sales in Washington State, over 20% of products sold were extremely high-potency cannabis extracts with an average of 70% THC. As cannabis legislation is increasingly reformed – Canada is set to legalise later this year – this new study suggests that potency may be a key factor in determining its harmful effects.

See report in The Guardian