Mike Ashton of Drug and Alcohol Findings continues his serialisation of the project’s essay...
Created On: 02 August 2021   (Last updated: 02 August 2021)

Mike Ashton of Drug and Alcohol Findings continues his serialisation of the project’s essay on the most controversial issue in alcohol treatment: whether dependent drinkers should always be advised to aim for abstinence. In this instalment: In early 1960s London, psychiatrist D.L. Davies opened up the first telling crack in the abstinence-only consensus. 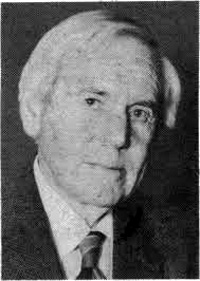 D.L. Davies: opened up the first telling crack in the abstinence-only consensus.

Though it flared hottest in the USA, the controversy dates back (1 2) to a 1962 report by British physician and psychiatrist David Lewis Davies (referred to almost universally as “D.L. Davies”) on seven patients discharged before 1955 from south London’s Maudsley hospital. Followed up in 1961, though previously “severely addicted”, these men (they were all men) were said after discharge to have sustained controlled drinking. They were very much the minority of a total of 93 patients – but given their status on admission, that they existed at all was considered remarkable.

Davies’ report started by restating the views of the time: due to presumed “irreversible” changes after years of heavy drinking, “Among those who treat alcoholics there is … wide agreement that these patients will never again be able to drink ‘normally’.” Yet it seemed the seven had, and for between seven and eleven years, associated with major changes in working or domestic lives which divorced them from constant contact with drink, or resolved the troubles which had helped generate and sustain dependence.

Witness to convention’s grip, the report ended by endorsing the orthodoxy its findings challenged: “It is not denied that the majority of alcohol addicts are incapable of achieving ‘normal drinking’. All patients should be told to aim at total abstinence.” But Davies did see his findings as giving the lie to the aphorism, ‘Once an alcoholic, always an alcoholic’. Unconstrained by this view, treatment could achieve “complete cures”; bolstered by radical changes in their lives (aided for the seven patients by two to five months in hospital), severely dependent drinkers whose drinking has social roots need not spend their lives in deepening dependence or teetering on its edge. It was this use of the findings to – even if only modestly – deny the absoluteness of the abstinence-only mandate which distinguished Davies’ report from earlier accounts. The effect was to generate a considerable response, but one limited to professional circles and “dismissive” rather than outraged.

Some of the 18 responses published in the same journal as Davies’ account put their fingers on the key practical issue: how to absolutely extinguish ‘dangerous’ chinks of hope that non-dependent drinking might be possible, when research showed these chinks existed, and were not even extremely unusual. Conceding that Davies’ seven were truly alcoholic would “cloud the clarity of our definition of alcoholism and our exactness of treatment, for [the few exceptions] occasionally make liars out of us when we tell a patient he is an alcoholic and can never drink again.” For this commentator, redefining exceptions as “pseudo-alcoholics … is the only way we can stick to our guns that a true alcoholic can never drink again. If we ever concede this dictum, we, as therapists, and our alcoholic patients, will be lost.”

Ironically, these doom-laden concerns came from a doctor who well before Davies’ report had himself documented the phenomenon of non-abstinent recovery among what he had then unambiguously termed “alcoholics”. Faced with the implications spelt out by Davies, his focus turned to how conceding that some people do manage non-abstinent recovery might undermine an unswerving abstinence-only stance in treatment, leading him to reverse-engineer his definition of alcoholism to exclude these ‘exceptions’. Similar concerns were to be expressed over a decade later in response to a US report which reinforced Davies’ contention that non-abstinent recovery was possible. In both cases, the impulse was to suppress or redefine the facts if they contradicted a valued theory, the opposite to the way science is meant to develop by contradictory facts forcing theories to be amended or abandoned.

Replying to the comments on his article, D.L. Davies made the point that far from denying the value of abstinence, all seven patients had first ‘reset’ their relationships with alcohol by a period without drinking at all, and that he remained of the view that “The patient who challenges the doctor’s advice to become a teetotaller, on the basis of what I have reported, should be told that the evidence suggests that only a minority may recover completely, and that he … would be wiser to assume that he will not be in that group.” Doubts that some of the seven were truly ‘alcoholic’ were countered by pointing out that this diagnosis had been made before it was known how the patients would fare after discharge, and that “In practice, one feels satisfied that a man is addicted to alcohol when he has tried to break off his use of the drug, which in some way is proving harmful, and has failed.”

Aided by access to Davies’ records and fresh data from the same seven patients, another 23 years passed before the most robust critique was published, and it came from within the institution Davies had led. It started by recognising the magnitude of Davies’ intervention. His successor at the Maudsley and the associated Institute of Psychiatry in south London lauded Davies as “a pioneer who made a daring exploration of what was at the time virtually forbidden territory”. Later he explained that “Davies was questioning not just a medical consensus, but the central and hallowed organising idea of the American alcoholism movement.” These comments came from the prestigious figure of the late Griffith Edwards, but a sharp edge embellished his homage to his predecessor and “mentor”. 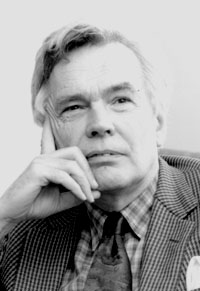 Griffith Edwards: claimed his “mentor” had been deceived.

That edge had become apparent in 1979 when the journal Edwards had started editing the year before published an interview with Davies. The interviewer – probably Edwards himself – told Davies of a personal encounter at the Maudsley with one of his seven patients. Contrary to the impression given to Davies in 1961, he had confessed to “drinking like a fish the whole time” and threatening to “bash the living daylights” out of his wife if she told the truth to Davies’ follow-up worker, to whom she had confirmed his more positive account. Significantly as it later transpired, Professor Davies also confessed to something: “I never regarded myself … as a research worker.”

The encounter prompted Edwards to re-examine such records as remained and to interview all six surviving patients plus relatives or carers. Conducted in 1983, the study was published in 1985. Having died in 1982, Davies could not challenge findings which cast doubt on whether some of the patients truly were severely dependent at the time of admission and whether most really had sustained ‘normal’ drinking after discharge. How starkly different was the picture gained from similar sources just over two decades before can be appreciated by the notes on ‘Case 2’. In 1961 Davies had seen a success story: “Drinks 1–2 pints of an evening but no spirits. Never drunk.” In 1983, Edwards saw a “catastrophic outcome”: “Heavy drinking recommenced not later than 1955; much subsequent morbidity culminated in 1975 with Wernicke-Korsakoff syndrome about 1973.”

In 1994 Professor Edwards revisited his critique of Davies, implying that ‘Case 2’ was the patient who had prompted the new follow-up. Yet in respect of this critical patient, mysteries remained, such as how he had thought he could successfully deny drinking problems when according to Edwards, during the relevant period he had been seen for those problems by one of Davies’ own clinical team. In 1994 Edwards said Case 2 had been discharged in 1954, while earlier he had said it had been 1950.

On methodology too, there were major discrepancies between Davies’ account of his study and that reconstructed by Professor Edwards. In his 1979 interview Davies had explained, “Every one of [the seven patients] was personally seen. Certainly Edgar Myers saw them and … I’m sure I saw them all myself.” In his 1962 report itself, Davies had mentioned another source – a female psychiatric social worker who “made a personal visit to their homes and in some cases to their place of work [and] made specific inquiry (from relatives as well as from the patient) about the drinking history since discharge.” After re-examining surviving records, Edwards concluded that Davies had relied largely on the “reports written by the follow-up social worker”, who in only one case had seen the patient himself. If in fact Davies had much more information, it might partly explain the different accounts of how the patients had fared.

Adjudicating between these accounts is beyond our resources, and perhaps impossible at this remove from the events. Professor Edwards was, however, in no doubt. In 1994 he remained confident that his check on the patients had revealed that Davies’ account was “substantially inaccurate”. A research-naive clinician “had been substantially misled” by “intentionally unreliable witnesses,” which his (in retrospect) flawed methodology was not up to exposing. Be that as it may, not-so-flawed work described later in this series was to come to the same conclusions as Davies.

In a book published in 2003, Edwards came to embrace normal drinking as a goal for many patients, but still maintained that (emphasis added) “abstinence is the only feasible objective” for those with a fully developed history of dependence. Among his criteria for identifying who should attempt which objective were those trialled by the Sobells in the USA, subject of a later instalment.

Next episode: “The gloves come off; the Rand report.” Support for the feasibility of controlled drinking in a 1976 US report was likened to “playing Russian roulette with the lives of human beings”. Full essay available on the Effectiveness Bank.