The SURE Recovery app: Jo Neale talks to the SSA

The SURE Recovery SMART phone app was launched in 2019.  It was developed with people who have lived experience of alcohol or other drug use and was designed for people who think they have a problem with drugs or alcohol or who are in treatment. In November 2020 we talked to Professor Jo Neale to find out more.

SSA: How was the SURE recovery app developed?

Professor Jo Neale: “It all started quite a long time ago. Back in about 2013/14 everyone was talking about recovery, but we didn’t have a very good understanding of what this was, or how to measure it. So, we thought that it would be good to develop a validated measure of recovery, one that was developed, not by clinicians or by researchers, but by community members – so, we could measure what was actually important to people in their own recoveries.

After we developed our measure with community members, we called it the Substance Use Recovery Evaluator (SURE). When it was published there was quite a lot of interest and people started to want to use it and translate it internationally. People also told us that they would like to see it in an app. So we decided to develop the SURE app.

We didn’t want an overly basic app with just the SURE measure, so we again worked with people with lived experience of substance use to develop something that included other features they would value.

Mindwave Ventures  were the app developers, and I also need to mention Alice Bowen who is a researcher in the Addictions Department at KCL and Paul Lennon and Mel Getty who are members of our Addiction Service User Research Group as they have all been part of the core team developing and disseminating the app. Alice, Paul and Mel have now produced a lot of resources about the app which are available on YouTube And recently, we’ve had some support from PHE and NHS England, particularly around the development of a COVID-19 feature.”

What other features were included?

“There are several features in the app. One is the SURE tool. This allows people to measure their recovery. They go in, complete the measure and it gives them a score along with some feedback at the end. If they complete the measure every week or so they can track their scores over time.

The second feature is based on a measure of sleep called the Substance Use Sleep Scale or SUSS. We included this because people who use substances and who are in treatment often worry about their sleep but say that no-one takes it seriously. The SUSS feature works in the same way as the SURE feature. When people complete the SUSS, they get a score and some feedback. If they repeat the measure, they can track changes to their sleep over time.

There’s also an artwork feature, so people interested in submitting artwork can submit it to the app. The banner of the app features art that we can change if people send us their artwork.

Then there’s a private diary where people can keep memos and notes about how they’re feeling. The diary isn’t visible to anyone, that’s private to them.

There’s a naloxone feature where people can learn about naloxone and how to use it in case of emergency, along with some information about overdose.

There’s a reading and resource section that includes a downloadable book. At the moment there are also some COVID-19 resources in there and we’re going to be building these up over the coming months.

There are some research questions embedded in the app that people can opt in to if they like. People don’t have to complete these. They can use the app without participating in any research. But, if they do complete the research questions, everything’s anonymous, confidential and securely stored and it means we can do additional analyses to better understand recovery.” 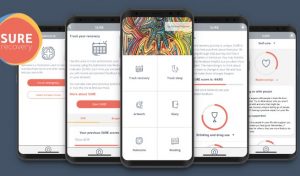 What kind of feedback have you had from people who use the app?

“We launched the app about a year ago [in 2019], then the next stage was to disseminate it to people who might find it helpful. At the moment we are doing some further research to find out what people think about using the app. We’re trying to find out what people like and don’t like. We then hope to use the findings to improve the app, but this will obviously need some more funding to create a version 2.

It’s quite important to emphasise that we are not suggesting that we’ve designed the world’s best recovery app. What we’re saying is we believe it’s quite unique, people seem to like it, and in due course we aim to improve it further.

I suppose one thing we always need to remember with mobile health applications, though, is that people don’t tend to use them daily. So, we wouldn’t expect people to download it and use it consistently for the next 10 years. It’s a tool for people to pick up and use if they feel it’s meeting their needs. The feedback that we’ve had is that people do like it, that it’s very user friendly and the content is good.

On the more negative side, it is a little bit opioid focused rather than alcohol focused, which is something we will try and address going forwards. It doesn’t have any bugs. I defy anybody to find any bugs. That’s because there was a really long development process and we went through many, many iterations to ensure that there aren’t any technical glitches.”

Do you think we will see more recovery focused apps as people gain access to technology?

“I think that over the coming years we will see more and more apps, some will be commercial, and some won’t be. Obviously, ours definitely isn’t commercial.  It’s free and was developed with, and for, community members. It is good that there is a range of apps available. This is not a competitive process, it’s more about giving people options. We all pick up apps that we use for different purposes and regularly swap between apps. So, having a choice of apps is something we’ve always felt is very good. We like the idea that there will be a range of apps that people can chose from. My guess is that we’ll end up with a lot of different apps doing different things.

The SURE app is first generation of many more that will come. But unless people use the first-generation apps, we won’t ever progress to more sophisticated second-generation apps.

I think that 5 or 6 years ago we would have been quite concerned about whether people would have the technology to use the app. Although there is still a lot of digital exclusion, many people do now have smartphones, including people experiencing a lot of problems and marginalisation. We’re aware that recently lots of services have been giving out smartphones, and this helps as well as it makes the app more accessible to people.”

Do you think that having therapeutic feedback from an app within your smart phone might change the nature of therapeutic relationships? Is it possible to have therapeutic interventions from something that isn’t a person?

“The first thing I would say is that SURE was built as an app that people could use to monitor themselves and track their own recoveries. At the moment, people are having less face-to-face interactions [during COVID-19] and are doing more things online. Lots of services are recommending to their clients that they download the app and use it. There are a couple of ways of doing that. Clients might use the app on their own, or treatment services can use the app to engage the client, so they can have discussions with their client about the kinds of data and feedback they’re getting from the app. So, it can be part of the therapeutic relationship, in an additive kind of way, but it’s certainly not meant to replace drug workers.”