‘Words matter’: from pejorative to people-first, stigmatising to strengths-based

Natalie Davies writes about why it might be time to get rid of some words from the substance use vernacular.

‘Language’ is the way we communicate with each other; it’s the spoken, signed, and written words we use to express what we want, how we feel, who we love; it’s the way we convey our attitudes, beliefs, and values.

Children learn about language in simple ways. Some words are ‘good’, others are ‘bad’; some are kind or complimentary, others are rude or hurt people’s feelings. To adults, of course, the world is much more complicated than that. And yet, we still grapple with questions all the time about whether it is ‘right’ or ‘wrong’ to say certain things.

“Language should not be censored, forbidden, or regulated, but there are important reasons why we find some language and words disempowering and offensive and why others are preferred by our communities.” –Words Matter! Language statement and reference guide

The aim of INPUD and ANPUD was to help the sector move away from “language that is pejorative, pathologising, stigmatising, and dehumanising towards language that values people first, promotes equality and inclusion, acknowledges diversity, and is strengths-based”. To this end, they offered ‘10 tips’ about language, and provided 11 examples of words and phrases that can be taken out from the collective vocabulary and replaced with more considerate alternatives.

Some of the terms they highlighted were more obviously offensive yet still in use, and other terms had subtler negative connotations or implications. For example, they explained that words such as ‘junkie’ and ‘addict’ were judgmental and pejorative, while terms such as ‘injector’ have the effect of diminishing the lives and identities of people who use drugs by reducing them to a single practice that they engage in.

Stigma and its effects

“Stigma isolates and separates people who use substances or have substance use disorders.”

“Stigma is a significant barrier to well-being and good health for people who use substances.”

“Stigma can make a person feel like their life doesn’t matter.”

–Overcoming stigma through language: a primer

The concept of ‘stigma’ crops up throughout the text. Stigma was described in 1963 by Canadian sociologist Erving Goffman as “the situation of the individual who is disqualified from full social acceptance”. Goffman said that stigma is “deeply discrediting”, and the source of it is something that marks a person or a group out as “different […] of a less desirable kind”.

For people who use illicit drugs and/or people who have substance use problems, stigma can manifest as being excluded, talked about as a ‘problem’ for society, and denied equal rights; it can sound like prejudice towards them by equating their identity with their drug use, belittling their value based on their drug use, and dehumanising them through labels. 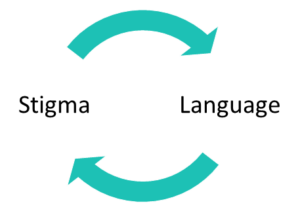 Just as stigma can be observed in the language used to talk about people who use drugs, stigma can also be preserved through this language, which can lead to a cycle of behaviours and attitudes that discourage people from seeking help, and affect the quality of, and access to, healthcare services.

Research has shown that terminology can have an effect on the perceptions and attitudes of members of the general public and clinicians. For example, studies published in 2010 by Professor John Kelly and colleagues found that: (1) someone labelled a ‘substance abuser’ was more likely to be deemed a social threat and deemed to be more deserving of punishment than someone with a ‘substance use disorder’; and (2) clinicians were more likely to agree with the need for a punitive approach than a therapeutic approach when they read a vignette about someone who was a ‘substance abuser’ rather than someone who had a ‘substance use disorder’.

It is “not just semantics”, as the Canadian Centre on Substance Use and Addiction say; “stigmatizing language and disrespectful attitudes have real-life consequences”.

“Language does not stand still. It is dynamic, and the language and words we use are always changing. This makes it difficult to be absolute in the way we use language.” –Words Matter! Language statement and reference guide

In 2015, the International Society of Addiction Journal Editors issued a public statement that “recommend[ed] against the use of terminology that can stigmatize people who use alcohol, drugs, other addictive substances or who have an addictive behavior”. They gave examples of words that should be avoided (e.g. ‘abuse’, ‘abuser’, ‘dirty’, ‘clean’), but said that it would not be possible to give globally-relevant recommendations about the use or non-use of terms in general.

The acceptability of words and phrases differs by cultural context (e.g. by country and social group), and also changes over time. Therefore, when looking for language guides, it is important to acknowledge that the recommendations are not universal, nor are they ‘written in stone’.

INPUD and ANPUD said that their guide aimed to “explain INPUD’s current position on the use of language and to provide clear advice on what is acceptable to us as communities of people who use drugs”. However, they also said that “Everyone should assess the use of such language for themselves in the context of their circumstances and relationships”.

Some slang terms, for example, would be considered highly derogatory and dehumanising when used to talk about people who use drugs, but can “play an important role in [the] everyday lives of people who use drugs”. As INPUD and ANPUD said, “People who use drugs have the moral authority to redeploy the symbols of their oppression and to use terms like ‘junkie’ as a form of empowerment, when referring to themselves and their communities”.

So while language guides may seem quite prescriptive at first glance, the spirit of them is not typically to ban certain words, but to encourage readers to ‘consider context’ and ‘practice care’. For the substance use sector, it is important to value the opinion and expertise of people who use drugs, and be open to changing our language with the goal of moving towards a more liberatory shared vocabulary.

Some other very useful resources to consult include:

Please email if you would recommend adding any additional resources on stigma to the list above.