Aims: Cannabidiol (CBD), the non-intoxicating cannabinoid found in cannabis, may be a novel drug for smoking cessation due to its anxiolytic and potentially anti-addictive properties. It has previously been shown to reduce the salience of cues, both preclinically and clinically.  Attentional bias, the ability for a drug to capture one’s attention, is heightened during abstinence and can lead to relapse. The present study utilizes an experimental medicine approach with the hypothesis that CBD would reduce attentional bias to cigarette cues.

Conclusions: In the first study to assess CBD for nicotine withdrawal, we found that CBD reduced attentional bias which may be the mechanism by which CBD exerts its anti-addictive effects in humans. This effect occurred in the absence of changes in withdrawal and craving suggesting it exerts an early and direct effect.

no conflicts of interest 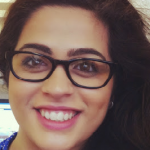 
Chandni Hindocha is a 2nd year PhD student researching the interaction between cannabis and tobacco on cognition, dependence and psychotic like effects. She is funded by the Medical Research Council under a four-year PhD in Mental Health. Her interests include a) The individual and combined effects of cannabis and nicotine on subjective and physiological responses, reinforcement and cognition in cannabis and tobacco users; b) The acute and chronic effects of cannabinoids on emotional processing; c) The effects of acute THC and CBD on memory, psychotic-like symptoms, reflective impassivity and enjoyment of music and d) Novel treatments for cannabis dependence.