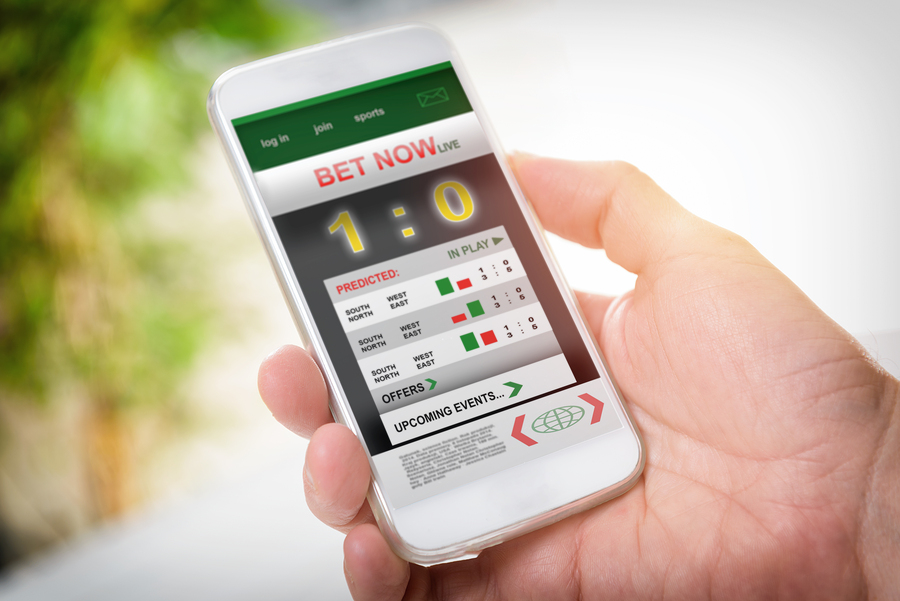 There are many forms of gambling available in the UK; from race tracks to casinos, scratchcards in a local newsagent to online in-app betting, gambling is available anytime and anywhere. In almost all forms of gambling, the ‘near-miss’ – where the gambler almost wins, but just falls short – forms a subtle yet intrinsic part of the gambling experience. Much previous research has examined the effect of near-misses on behaviour in slot machine play [1-3], but gambling researchers are yet to establish an experimental paradigm to comprehensively investigate near-misses in a sports gambling context.

A straight accumulator is a common form of gambling on sports, where the gambler selects a set of events they believe will happen, and all predictions must be correct for the bet to win. Accumulators offer the potential for large wins at massive odds from small stakes, and appeal to the naive and amateur gambler and occasionally, all top division favourites win, which results in a large payout for the bookies. This example  from 2014 paid at 1203/1, just for backing the 13 favourites playing on the Saturday across the top divisions in England and Scotland.

An example accumulator might be comprised of three or four strong favourites (bankers), usually at home, combined with perhaps two or three less-strong favourites (but still favourites none-the-less) to boost the odds. The bankers are usually a side near the top of the table, on a good run of form, at home to a side in the bottom half, preferably with a less than good away record. The kind of match that a team with aspirations of winning their respective leagues, such as Bayern Munich, PSG, Manchester City or Barcelona* will generally win as a matter of routine with minimal effort and fuss. These sides can form the bedrock of a European accumulator, however, more commonly than might be expected, at least one favourite will fail to win. A prime example of a favourite unexpectedly failing to win came recently from Greece, and Olympiacos; examination of the relative form of the two sides could only point to an Olympiacos win. But, after 17 straight league wins, the reigning Greek champions were held to a 1-1 draw by Platanias, a team who themselves were on a poor run of form. Such results can often ‘bust’ accumulators and are potentially instrumental in sports bets resulting in a near-miss.

In slot machine gambling, near-misses occur when two reels match on the machine payline, with the third icon finishing just one click either side of the payline. Near-miss outcomes have been shown evoke similar neurological responses to win outcomes and are processed as less pleasant than other non-win outcomes, but inspire more motivation to continue [4]. A number of hypotheses have been suggested to explain the paradoxical effects of the near-miss including frustration [5], counterfactual thinking [6], and skill acquisition [7], but the pertinence of each of these theories in relation to sports gambling remains unknown.

It can be argued that in a gambling event where the outcome is dictated purely by chance (e.g. the lottery) there is no influence of skill. Therefore, a near-miss is not indicative of future success. However, unlike chance-based forms of gambling such as roulette, where each spin is statistically independent and therefore previous outcomes have no bearing on subsequent spins, sports event outcomes are influenced by previous outcomes, or form, and can therefore be considered to contain an element of predictive skill. However, it should be noted that results from previous work looking at the influence of skill in a sports betting context is not clear-cut, with some research papers reporting a positive influence of skill, but others which report experts performing no better than chance [8-10].

It is a challenge for researchers to replicate sports betting based near-misses in an experimental context, and to ascertain the influence of near-misses on future gambling behaviour. Each of the three examples of near-misses in a sports gambling context shown below highlight factors that the researcher must consider when assessing how the individual assesses the outcome. Although the accumulators each shared an identical outcome (falling just one result short of success), the way in which they lost varied, and each type of loss can be related to a different theoretical perspective.

Much like the left to right sequential reel-stops on a slot machine, the point of outcome resolution, or the point at which the bet loses, becomes important. In bet 1, Panathaniakos had failed to win before the last three games had even started, rendering their outcome obsolete. The bet had lost before the gambler had the opportunity to process the outcome as a near-miss. 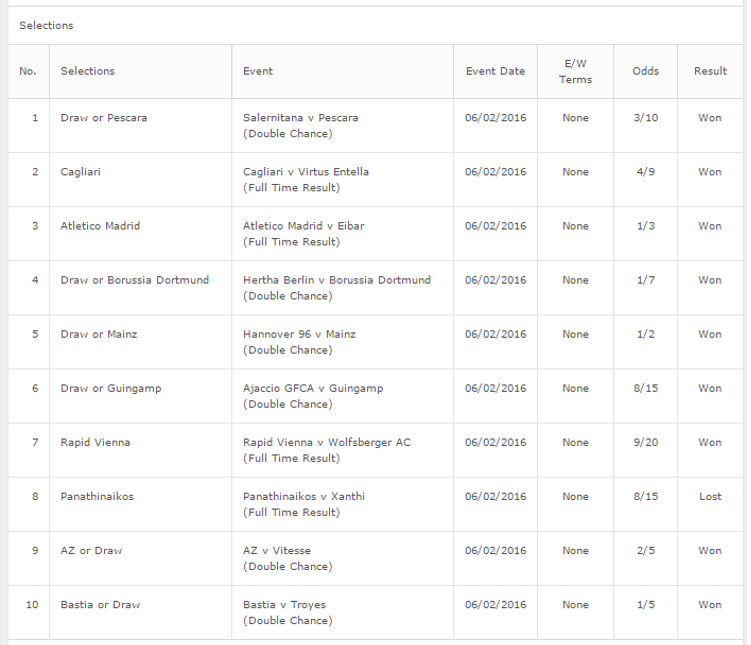 In bet 2, all games kicked off at 3pm, therefore right up until the final whistle in the Burnley – Hull game, the win was still possible. A gambler paying attention to scores would know the bet was 1 goal away from winning (Hull lost 1-0). 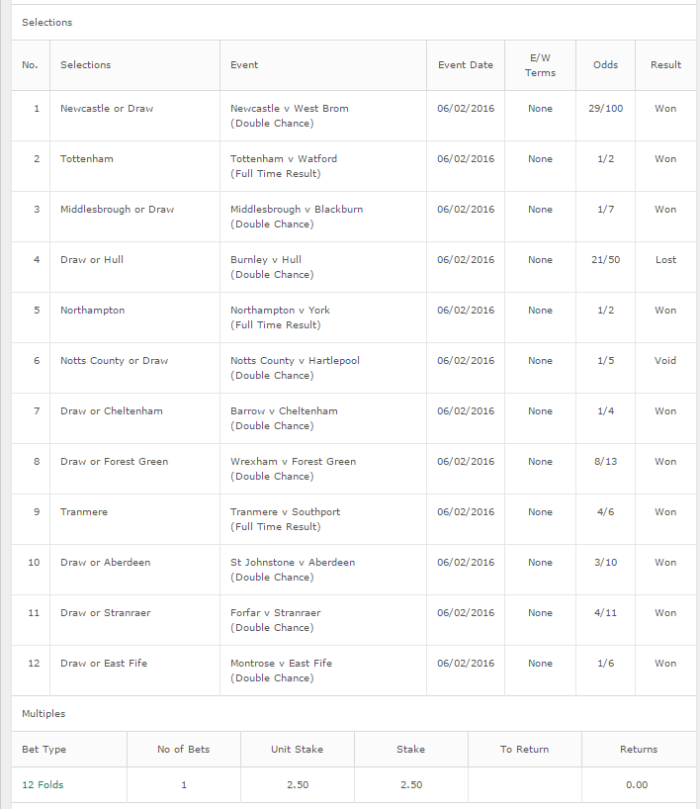 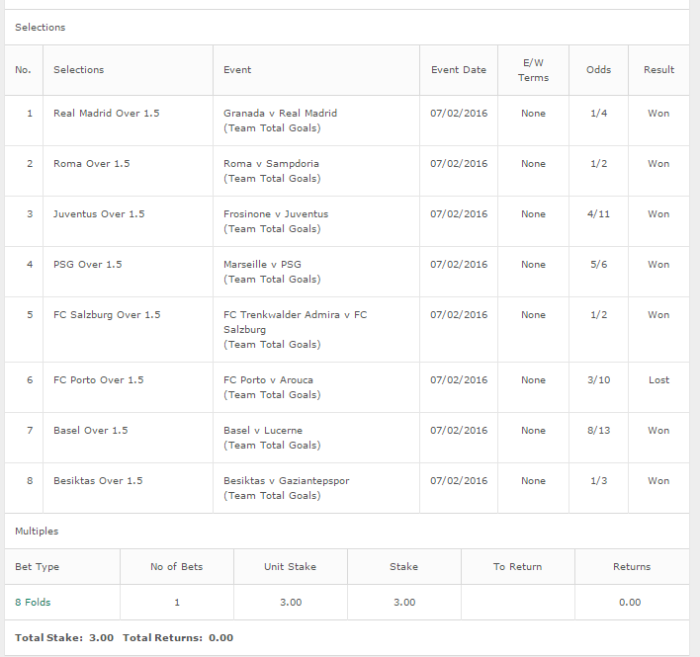 A further complication from an experimental perspective is relating the odds of the event that didn’t happen to the psychological response. For example, in bet 1 Panathaniakos were clear favourites, being strong at home and much higher in the league than Xanthi – for Panathaniakos to be the only event to not happen is frustrating, as all odds and form point to a home win. In bet 2, Burnley away was a tricky fixture for Hull; application of counterfactual thinking allows the gambler to rue a poor event selection. Bet 3 leaves the gambler with a sense of being unlucky; for a giant like Porto to score in the 14th minute and then fail to score again in the remaining 76 minutes at home, against a newly promoted side is very unusual. Indeed, the Porto event was the second most likely event on the slip at 3/10. An outcome like this may allow the gambler to feel ‘unlucky’, and that their overall event selection was in fact ‘skilful’ and unlucky not to win. This fosters a sense of skill acquisition, where the gambler will place more confidence in their own judgement on subsequent bets.

Point of outcome resolution and expectancy weighting of event success are just two elements that must be considered by the researcher when measuring the near-miss effect in accumulator-based sports betting. Even as a gambling researcher, it is difficult not to experience the ‘near-miss’ effect when betting on sports. These three different emotional responses to sports betting near-misses: frustration, regret, and a sense of a good bet being unlucky, all have the same impact – a initial negative emotional response, coupled with a motivation to continue gambling. The skill acquisition hypothesis would suggest that following a series of near-misses, a winner is imminent; the gambler will feel motivated to bet again, and herein lies the inherent danger of the near-miss in a skill-based context – when the gambler believes that a win is getting closer due to their own skill, the desire to gamble again increases. Gambling more because previous outcomes lead the gambler to believe a win is imminent is simply a different name for chasing losses.

The examples given above are for straight accumulators; of course, sports betting has many more options than this, which are equally difficult for researchers to capture in an ecologically valid experimental context. Gamblers now have the cashout feature, which allows withdrawal of all (or a chosen percentage) of the stake at a given time during the events. Accumulators can also be structured in different ways, such as a Yankee or a Canadian, which allows some form of payout even if not all the selected events are winners. This type of sports betting can lead to losses disguised as wins, an event type that will warrants its own discussion.

7. Clark, L. (2010). Decision-making during gambling: an integration of cognitive and psychobiological approaches. Philosophical Transactions of the Royal Society B: Biological Sciences, 365(1538), 319-330.