The therapeutic potential of cue-exposure therapy for addiction

Pavlovian or classical conditioning is the process of learning associations between stimuli and outcomes. In regards to addiction, drugs are an unconditioned stimulus (US) that produce reliable biological and psychological unconditioned responses (URs). It is believed locations and stimuli that are present during drug use (e.g. sight and smell of drugs, glasses, syringes, friends etc) become conditioned stimuli (CSs) that can produce a conditioned response (CR) similar to that of URs. A CS’s capacity to produce a CR is believed to lead to motivational changes such as cravings which can trigger drug use and relapse (Everitt and Robbins, 2016) 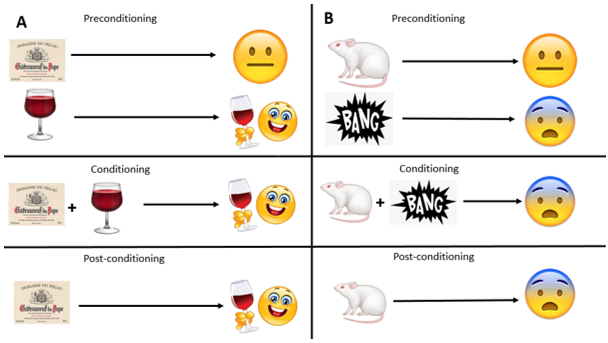 Figure 1: A schematic depicting classical conditioning. In the preconditioning box an image of a specific brand of alcohol is neutral and elicits no response, however alcohol, being a US, produces positive psychological effects. In the conditioning box alcohol and the brand are presented together during alcohol consumption resulting in an association between the two. In the post-conditioning box, sight of the brand alone elicits a memory of the positive psychological effects of alcohol consumption which induces motivational changes such as cravings and increases the propensity of approach behaviour.

Extinction is a phenomenon within Pavlovian conditioning where the CS-US associative link weakens after repeated non-reinforced presentations of the CS. As a result the CS loses its capacity to produce a CR (Bouton et al, 2006). It is important to understand that extinction entails new learning and not unlearning of the original CS-US association. Extinction has led to the theoretically promising Cue-Exposure Therapy (CET).

The procedure for CET exposes alcohol-dependent patients to the sight and smell of alcohol without allowing consumption in an attempt to weaken the CS-US link via extinction and by extension attenuate cravings. CET has been clearly demonstrated to be very successful in the treatment of psychiatric disorders with a parallel Pavlovian conditioning aetiology e.g. anxiety disorders (Norton and Price, 2007). Surprisingly, in contrast to this, CET has not thus far been demonstrated to be effective for treating addiction (Conklin and Tiffany, 2002).

The discrepancy of therapeutic gains of CET between addiction and other disorders could potentially be explained by one or more of the following: 1) flaws and limitations of the current CET literature, 2) the current CET procedure failing to accommodate important theoretical influences of addiction aetiology and relapse e.g. context renewal, and 3) individual differences in learning mechanisms between drug dependent and non-dependent individuals.

Limitations of the Current Cue-Exposure Literature

It must first be noted research of CET for addiction has been limited with only 46 published randomised control trials over a three decade period. Such a small amount of research limits our ability to draw firm conclusions on the data.

While some research has shown CET reduces cravings, increases the time to relapse and reduces the amount of drug use to a greater extent or at least equally to the comparison control treatment (Drummond and Glautier, 1994; Niaura et al, 1999; McClernon et al, 2007; Franken et al, 1999), CET has never produced long-term, complete abstinence for drug-dependent patients. There are several important limitations that are consistent across the majority of CET research for all drug classes which could confound the results and mask potential benefits of CET. Firstly the sample sizes of these studies tend to be small and attrition rates tend to be high. Secondly, there is often a lack of control group or no appropriate control group. Thirdly, they often lack interoceptive stimuli (e.g. moods, drug states) and only utilise a limited number of exteroceptive stimuli. The exteroceptive stimuli used has sometimes been standardised and not idiosyncratic to the patient.

Another important confound to the data could be the context in which CET takes place. The CS-US association during drug taking happens in locations relevant to the patient (context A). CET is administered in a clinical setting (context B) and after this, the patient returns to their home/ drug taking environment (context A) and therefore the extinguished cues are vulnerable to context renewal (Bouton et al, 2006). One approach to address this is to administer CET in multiple contexts in hope that extinction learning generalises across context. Another approach has been to either give patients ‘homework’ where they practice cue-exposure in a home setting or to have cue exposure entirely take place in their everyday life. The results of these studies that have extinction occur in context A are promising (Sitharthan et al, 1997).

Another reason for the discrepancy of CET’s success between addiction and other disorders could be due to the neurological maladapations associated with long-term drug use. Robinson and Berridge’s (1993) incentive-sensitisation theory argue long-term drug use produces long-lasting changes to the brain’s reward system that make us highly sensitised to rewards. It could be that CET only extinguishes the CS-US link superficially and the underlying neurological changes persist which enables context renewal and spontaneous recovery. CET procedure in the current research has had small amount of CET sessions for the patients typically spread over several weeks. CET could potentially benefit from a larger amount of sessions or booster sessions every so often. It has also been argued patients should receive extinction reminders (stimuli that were present during extinction sessions) when cravings are high. This can be achieved with a tone being administered via mobile telephone.

In summary, CET has thus far not been demonstrated to be an effective treatment for addiction. However, the literature is limited by methodological issues consistent throughout it. In addition to this, the extinction research is not easily translated into clinical applications and the CET procedure could potentially benefit from being refined to account for theoretical issues underlying extinction and individual difference between drug-dependent and non-dependent individuals.